skip to main | skip to sidebar

The last days I filled my evenings with stitching this lovely sampler. And here is a picture of my progress so far.

For now I'll put the "Queen" to the side and pick up my Hawaiian Mandala because the next part just got released.
What concerns new stash...to the total dismay of my husband I fell in love with simple little charts like "Little House Needleworks" and the such and got me couple of patterns. I bought "Snowflakes" and "Wool Needlebook" from Little House Needleworks and "Prairie Birds" from Prairie Schooler.

Poor Mike is not really enthousiast with my new love of this kind of patterns. Later this year I'll make him happy by starting "Coming to Life" which is a beautiful African themed pattern.

The reason I didn't start it yet is that I wasn't really impressed with the quality of the chart. After creating a chart on my own and taking months of fiddly work to get a clear picture of what I want to display, I got a bit picky. And seeing a chart which is basically created from a scan and not much "clean up" work done, makes me cringe. I looked EVERYWHERE to find the original painting or artist to be able to ask the artist for permission and make a chart myself - so that I could create a clearer picture of the animals. Can't find it. Oh well, since Mike loves this pattern so much I guess I'll skip all that hassle and stitch it as it is.

Finally it's finished. After I changed the bead colors I thought I would run out of white beads. To my upper surprise there were JUST enough beads to finish it. What a luck...but then I ran out of svarowski crystals...lol. I ordered a bead packet and it stated it had 24 of that color, but it were only 20 of them. That was a bit of a bummer. So I ordered couple of them from an Australian seller instead of going back to Cindy from the European X Stich Company. She would have sent the missing beads at her cost, that's without a doubt. But I figured it would first of all take around 2 weeks before I would have the missing crystals, and secondly sending 4 beads from the United States is a bit over the top. So I let that pass and simply bought them myself.
Anyway, the beads arrived today and it's finished.

Isn't it funny somehow. You're busy with stitching, looking forward to finish it. Then you finally finish it, are all happy about it.....open the draw and put it in. Done. Although, I do plan to get this one framed. Soon...I think. LOL...I just realize that I said that about the Kookaburras I stitched last year too, and then it took almost a year before we brought it to the framer. On the bright site: if you wait quite a while before you bring it to the framer, you'll get again that "happy dance" feeling after framing.

Right now I fill my evenings with stitching at the "Queen of the Needle". Also in the start blocks is a small work to be finished as a floss tag for an exchange, another big Mandala, 2 boxes, and my husband is waiting for me to start his favorite - an African painting called "Coming to Life".

This is the very first time something like this happens to me. Not the first time I'm stuck...lol...that does feel slightly familiar. But the reason for it is new. First time ever I really dislike a choice of a designer. The Alpine Season Garden has in each corner a flower that is completely beaded. The flower itself is dark grey!!! And I'm not really thrilled about that. To be sure I beaded one completely, because you never know how it really will look until you see it. At least that is how it works with me.

After that I was yesterday busy for quite a while trying to figure out with what to replace the grey. In the end I settled for a white color that is used in the design as well and left the second bloom color as it was. That is a transparent color with a blue-ish shimmer. Problem was...once finished the blue-ish bead looks grey as well. For now I think I concentrate on the edge, and have a look then into a light pink to replace the second color as well. The greens of the stem I leave as they are. This means I'll have to redo both flowers...lol. Oh well, keeps me off the street doesn't it? NO...it doesn't. It's today a beautiful day...I'll finish this post grab the dogs and drive to the bush to have a nice walk. That beading can come later. I won't be able to finish the beading anyway this weekend. I'm pretty sure I need to order in at least one color...probably two. I'll see how it goes, may be I'll have JUST enough beads.

Here is a picture of both beaded flowers 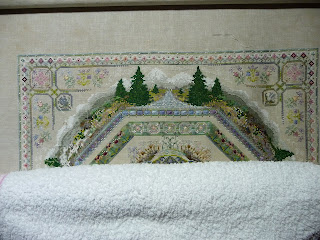 And here from each flower a close up 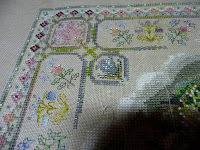 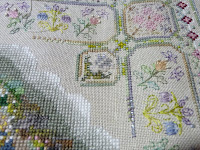 Yesterday was such a beautiful day. Michael and I took the doggies and went into the bush for a nice long hike. And boy am I glad we did that. Today it's not raining...it's pouring. When I went for some grocery shoppings I got soaked in seconds. Who would ever consider to take an umbrella - not me obviously. I only tell my kids not to forget that...and show them then how wet you get if you don't follow my advice. Good that they didn't see me...lol.

Anyway, since it's so wet and dark outside, it's a purfect day for beading. Mike is at work, Melanie at school and Saskia in Melbourne. The doggies are thankfully still worn out...I don't feel like housework today - I feel like beading today.

I thought beading 1.556 beads would take AGES. However to my total and most pleasant surprise it flows nicely off the hand. I beaded yesterday evening quite a bit, went on today and bit quite a chunk out of it. 700+ beads are already attached.

IT'S DONE....IT'S DONE....IT'S DONE. The stitching is...not the beading though. But for now I don't care...I'm too busy here with my happy dance. All stitching done. Right now I'm sooooo happy that I "finished" it. Tomorrow the truth will hit me probably that this piece is far from finished, but today I don't go there. Today it feels as if I have finished "something".

Besides, at the moment I don't want even to try to figure out how long it will take to put 1556 beads and couple of swarovski chrystals on it. It sounds a lot. I'll see how it goes. Can't hide from that anyway if I want to get this piece over and done with.

Ohh...and the picture looks a bit crook because it's hanging on the floor frame and the heater started to blow. (meaning I didn't have the patience to wait until the heater was done)

Today I received the magnet that Vanessa sent me. She chose a pattern she thought would fit my taste...and right she is. I absolutely love the flowers with the birds. It looks so lovely. Vanessa started cross stitch not so long ago and she did a fabulous job here didn't she? I'm impressed and will cherish this magnet.

I wonder if that little girl in the picture is her daughter? It's a cutie too isn't it?

Yesterday I finished the Chistmas ornament for an exchange at the "I Love Cross Stitch" yahoo site. For this exchange you don't have a partner, but we all send it to one of the moderator's who will then send an ornament to each participating member. There for I can already publish a picture of it.

And boy was I wrong. When I chose this design I thought that would be EASY as. As always....I'm wrong. Every time I think that something is very difficult I'm surprised how easy it was in the end - and virtually EVERY time I think this or that is easy as - I fall flat on my face.

Let's face it. I'm a beginner at smalls - and there for also a beginner when it comes to finishing techniques. Would someone please ...pretty please....give me a whack when I say next time, something will be most easy.

After the flat fold went so easy off my hand I thought, finishing is not such a big deal. Easy as!!! Chose a triangle shaped ornament...can't be that difficult can't it? And it is as if a higher power above me heard me saying EASY, opened and eye, looked at me and said: "Oh yeah? Is that so? TAKE THAT!!!" WHACK

It took me AGES to get it right. I had to make the inner layer 3 times, still the card board refused to go to the upper edge. Then it took ages to get the edging right, and don't discuss corners please. There has to be a better way to attach cording. But on the bright site...in the end it doesn't look too bad. I leave it as it is, and will send it off this week.

And here a picture of the back:

Queen of the Needle and Christmas Ornament

The last 2 days I was working on the "Queen of the Needle", but somehow it didn't get the attention it deserves. After subscribing to another exchange, this time a Christmas ornament exchange, I started looking for a nice design. And because of that I lost a bit the fun of stitching on the "Queen of the Needle" Finished off the second band and took it off the frame - for now.

On the exchange front I found 2 designs in the end and went right into my stash to see what I have for it. I'm not sure yet if I'll stitch both of them or not. Point is that the one I like the most doesn't have that much stitching involved. Which makes me rather feel guilty even I really really like that one. So I might keep that one for myself then because I won't send anything off that looks like I wouldn't have put much effort in it. Not sure yet. On the other site it will get stitched on nice opalescent linen from Picture this Plus. It's a one of a kind color. And I'll use silk thread. That should make it up.
The other one (IF I'll stitch both) will be stitched on Lugana with DMC, also some beads. I'll see how it goes. Tomorrow I'll go into town to have a look for nice backing materials for both.

Gabi
I'm 51 years old, married and mother of 2 daughters. We live in Victoria, Australia and share our house with 2 dogs and 2 cats. My interests are hiking and stitching...and cooking. 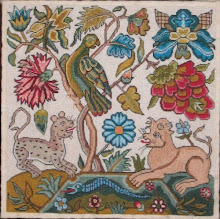 A Parrot, A Leopard, A Lion by the Scarlet Letter